It took over three years to finally meet Keith, the owner of the Gorse Industrial Park and take a tour, because Covid had reared it’s ugly head, but it was well worth the wait.
Although not military anymore, the unit is unique as a former Cold War nuclear weapons maintenance facility.

A group of eight of us met at Thickthorn McDonald’s to commence our cross-country rideout via Watton to the Gorse Industrial Park, near Thetford, it was here that we met Keith and were welcomed by him in the visitor’s centre.
He regaled us with a short history of the site complimenting it with a couple of short films, interspersing this with witty anecdotes of his professional life and how he and his wife came to purchase the property, it was informative and funny but a complete eye-opener as to what was happening close to Thetford during the Cold War.
Once Keith has finished this part of our visit, Richard, his son and a Honda Africa Twin owner took us around a walking tour of the old nuclear bomb maintenance facility, pointing out the original buildings, double fences with a wide open section in between each fence that would have housed trip wires with flares attached to warn the guards should anyone be stupid enough to try to breach security, the facility also housed RAF guard dogs, watchtowers with a clear field of view of all the site, which was in turn illuminated by harsh white light from lamp posts. The concrete fence posts were arranged “out of line” every few yards so patrolling RAF personnel could see right along the fence line.
Why all this near Thetford, well it was because Britain’s nuclear bombs named Blue Danube were maintained here and the nuclear core for those bombs were stored on site in specially designed “hutches”. There were more hutches than cores to fool the Russians into thinking that we had more nuclear bombs than we did. We were shown around all of the site, some now
left to nature for the birds, bees, insects, and sheep which the site now houses, we did see a couple of kestrels which have made the location their home too. Richard told us of what each building was used for and how they had been preserved which included taking original paint samples so completed hutches could be painted as they would have been done originally. We completed Richard’s extensive and very interesting tour by returning to the main site to where one of the bomb maintenance facilities had been refurbished.
Here we met Keith again who opened this large building and explained that the bombs were hoisted off the back of a lorry and placed onto a trolley before being taken tail less into this building for maintenance. We returned to the visitor’s centre to complete our tour of this fascinating Cold War facility by Keith showing us another short film and wishing us a safe journey home. Finished? not quite, Richard invited us to climb into their fully-refurbished watchtower where he explained the major points of the
site from an overhead view and a few of us took him up on his offer.
The site is so unique that English Heritage/Historic England have become involved to assist in keeping this unique Cold War facility in existence, money well spent in my view.
What did they tell the locals of what was going on here at it’s height? – well nothing but the rumour of training monkeys for space flight was never confirmed or denied!!!

I really can’t thank Keith and Richard enough for all the time and trouble they went to today for us and I bet they had heard “I didn’t know this was here” many,
many times before, it was a brilliant visit.

We were invited back to the Lion’s Charity Fete once again following the Covid restrictions and managed to muster a group of seven bikes from HOC members and friends.

We were joined by Freda in her car, bringing a gazebo giving us much-needed shade and Michelle in her van supplying us with bacon rolls and coffee which were also very welcome, so thank you ladies for that. Once the fete was open, we had a steady stream of people round, looking at the bikes, asking questions, and telling stories of “back in the day”. Mark and Michelle’s son, Josh kindly spent time with us during the day and his bike bolstered our line up to eight solos. Phil was busy demonstrating all the bells and whistles on his Gold Wing to anyone who stopped to admire his bike, and there were quite a few. Most of us took the time to wander around the stalls and attractions including Andy, who returned with an armful of ice lollies to keep us cool, thanks Andy.

We received a visit from a couple of the Lions committee members who thanked us for our efforts and as the crowds began to diminish, we slowly began to pack up, answered a few more queries then returned by various routes to our homes, a very successful day.

Thank you all who came, giving your time freely to support the Lions charity and answer so many questions. 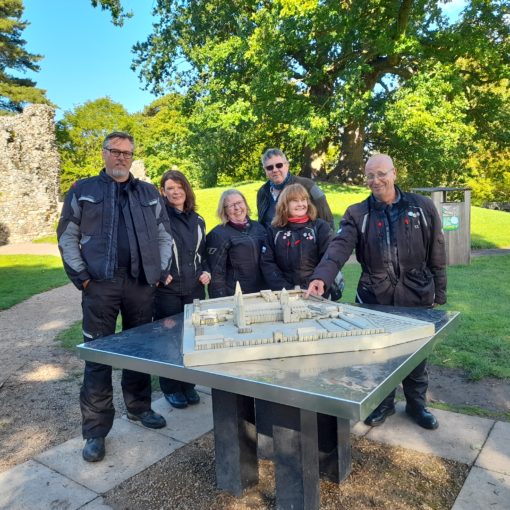 Sunday 2nd May Rideout no.1 Due to the current Covid reguations and our numbers, we organised two rideouts, both meeting at The […]